Welcome to our interactive map 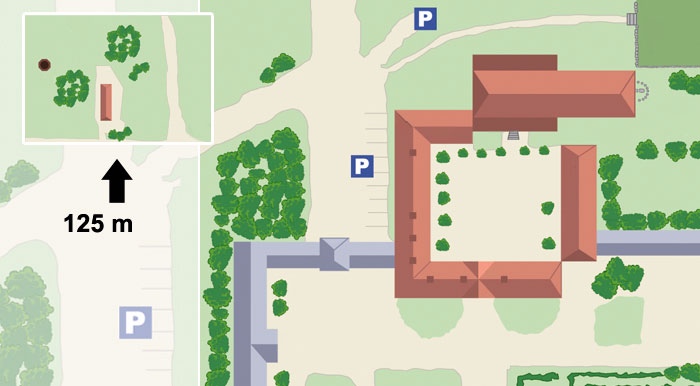 Klik her for at se vores interaktive kort

The Living Room of Aunt O

The Diary Entries of H.C. Andersen

The Monks’ quarters (your welcome to eat your packed lunches here)

The Herb Garden (the northern gardens)

Ever changing art exhibitions and The Bayeux Tapestry

The Hill of Bodil

Tap an item to read more about the place.

A fantastic shop with an extensive range of items, including fashionable clothing and interior design items. 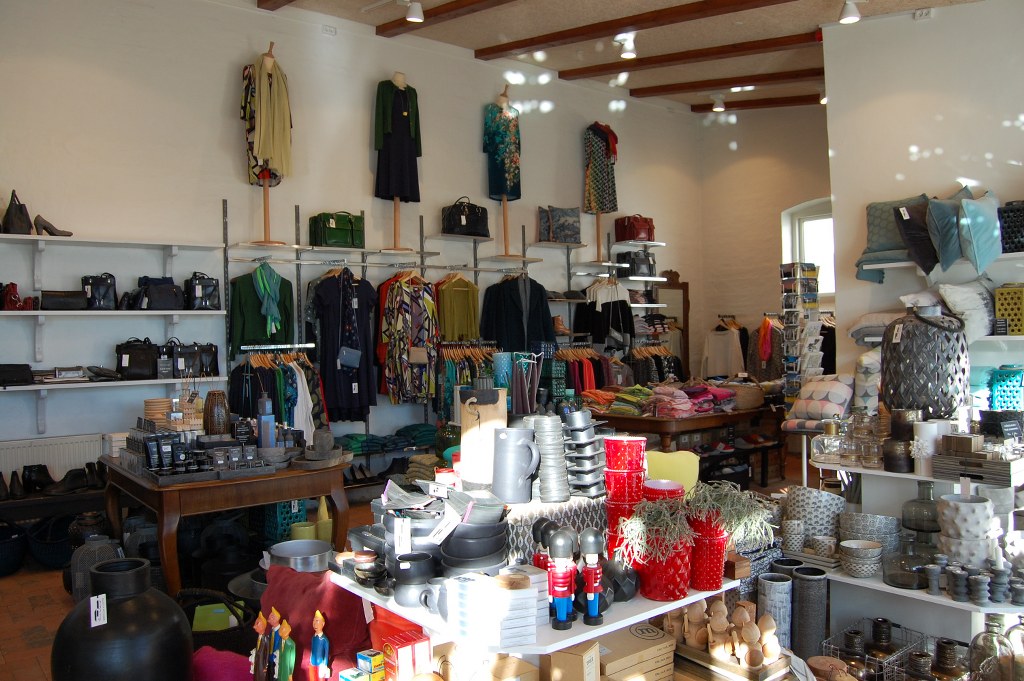 Experience the history of the Monks, or rather the Cannons, who lived at the monastery by reading our exhibition on their daily lives during the medieval.

The exhibition also describe the special circumstances that surrounded the life of not only a monk but also a cannon of the premonstratesian cannons who inhabited the monastery among the apparently rough Danes of the north – far away from their original home in Northern France.

This exhibition tells the story of Boerglum Monastery in the middle ages and of how the premonstratensian cannons both took part in and affected Northern Jutland. 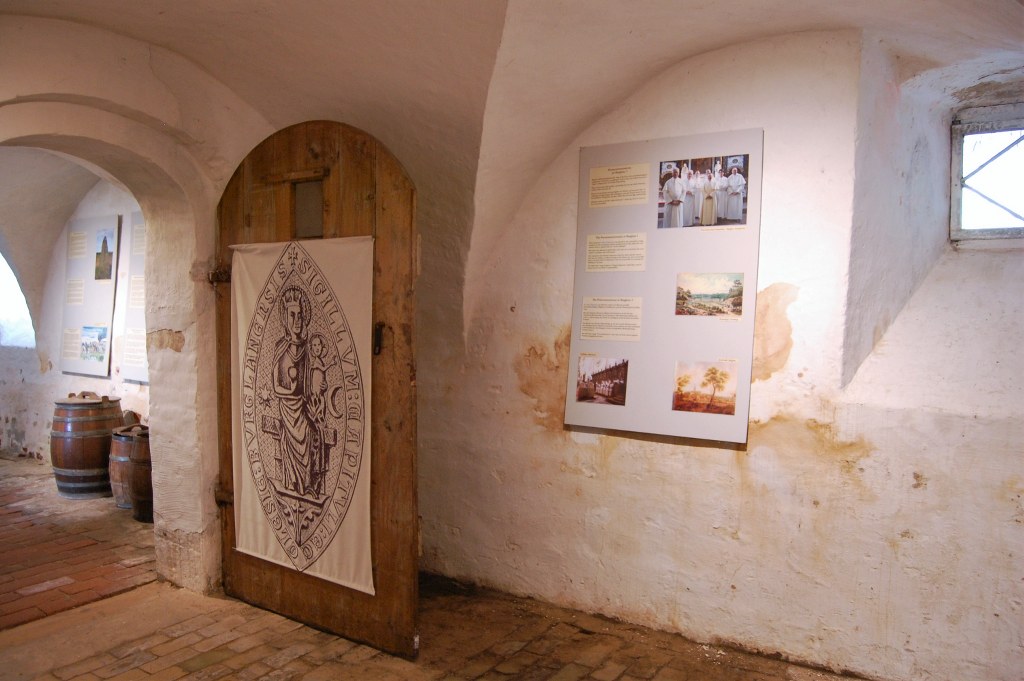 The old house kitchen have been rebuild as it looked like in the years 1900-1950, at a time, when the monastery had its largest number of staff, seeing to all the every day tasks of the household and farm.

The blue kitchen equipment has once again taken its place in the cupboards. The long white washed dining table for the male employees, where they would take the seat in accordance to their rank, is once again ready for use. The stove has been polished.

With all this, the atmosphere of the house kitchen has been restored. 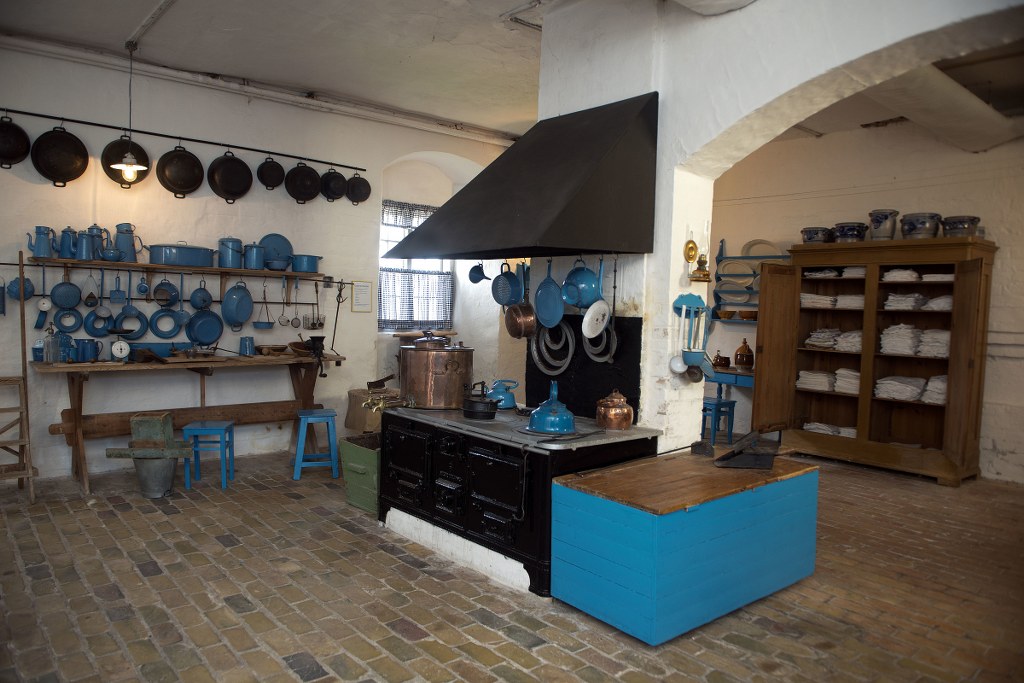 The Living Room of Aunt O

Othilie Rottbøll was the oldest daughter of the first Rottbøll to own Boerglum Monastery, Christian Michael Rottbøll.

It was Othilie whom entertained H. C. Andersen when he visited the monastery, going on excursions around the local area throughout his ten-day long stay at the monastery.

H.C. Andersen visited the monastery twice, first in 1858 and again soon after in 1859. In one of his diary, written when he stayed at the monastery, he states:

“It became evening, calm weather and very clear, past the wild bog, across some moor we arrived here at half past nine; it is a dark estate, which made an impression of a large hospitable manor on top of St Gotthard, here was the cold brisk mountain air and a view of the land.

The Sea has eyes.

I got a good room, where the Bishop Kirkegaard had slept and seen ghosts, a throng of cannons”… 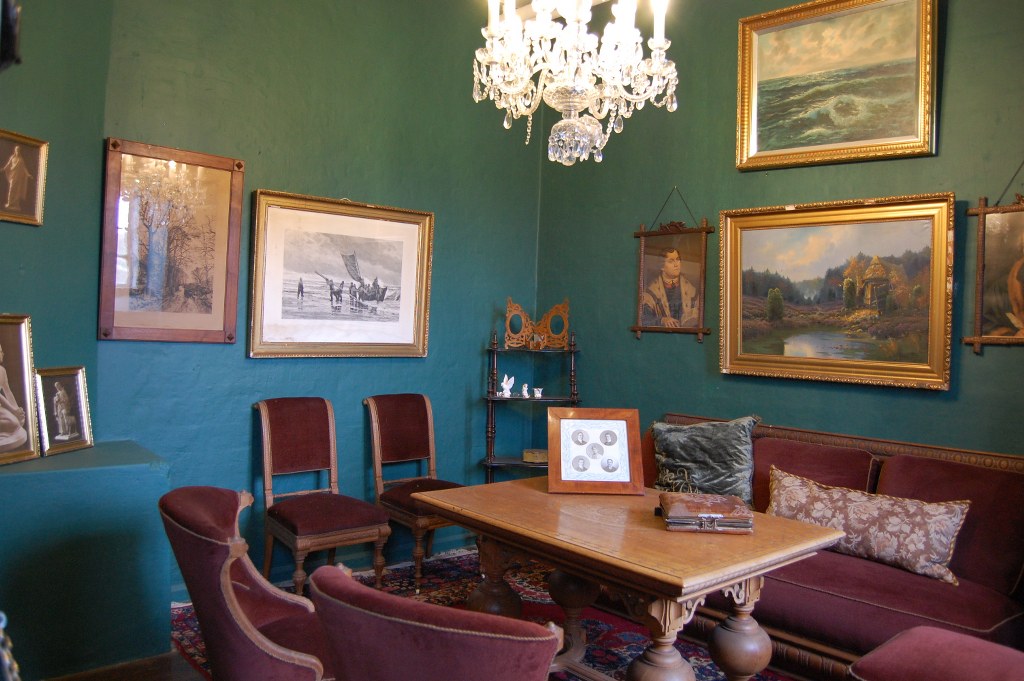 The Diary Entries of H.C. Andersen

H. C. Andersen visited the monastery in 1858 and 1859. The poet stayed at the monastery for 10 days and Othilie Rottbøll, the oldest daughter of C.M. Rottbøll, took H.C. Andersen out on trips around the local area. They visited Rubjerg Knude, Løkken and Hjørring.

The bed in which the poet slept, while staying at the monastery, is showcased in the exhibition within the eastern wing of the monastery.

Here you are able to see and read copies of H. C. Andersen’s diary entries from the days he spent at Børglum Monastery, depicting his experience of the landscape, weather and the general area. 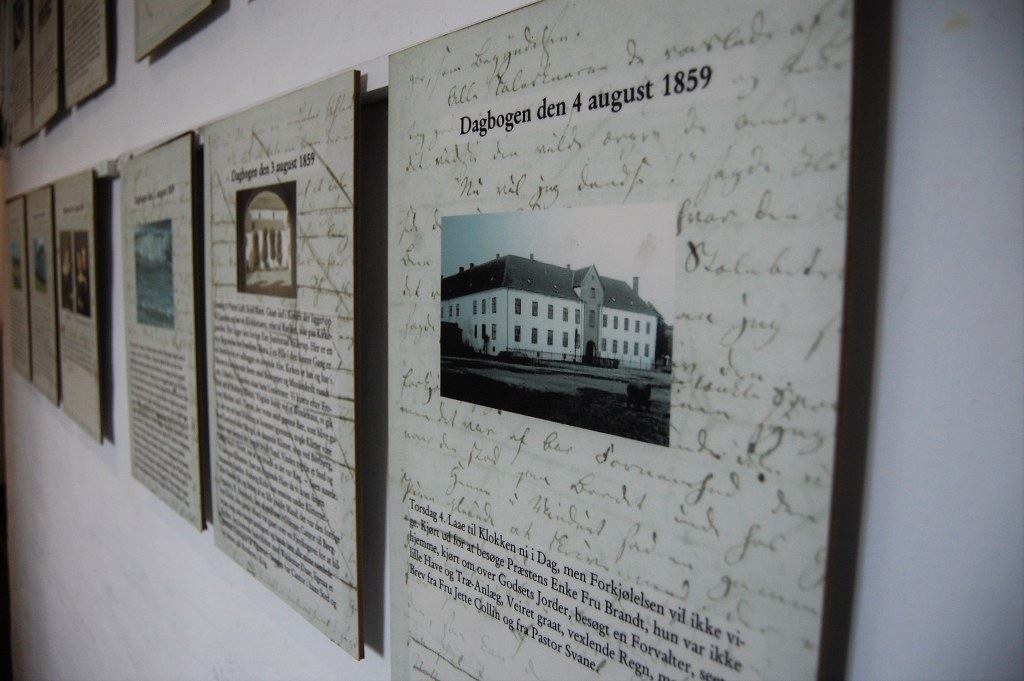 The Monks’ quarters (your welcome to eat your packed lunches here)

The texts in the monks’ quarters tell the story of Stygge Krumpen (1519-1539) – the last bishop of Børglum Monastery.

He was trained in England by SOE and was given the task of starting the Danish resistance movement against the Nazi-occupation. 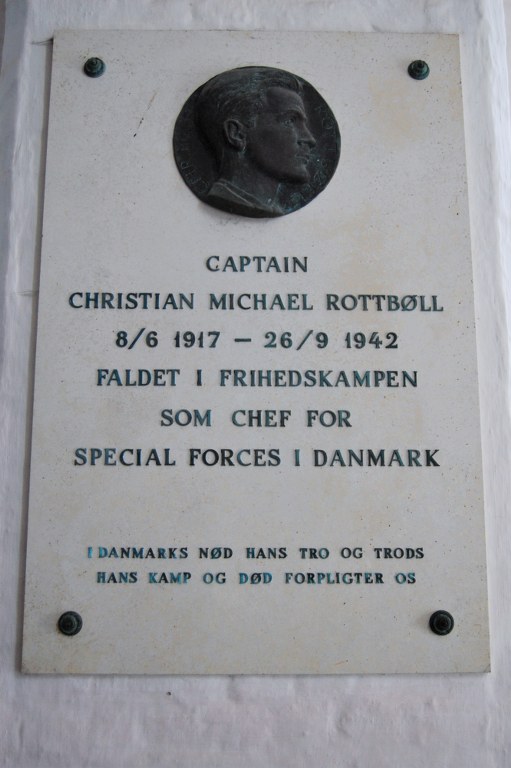 With a visit to the Cathedral you can experience the marvellous architecture and beautiful decorations of the 1000 years old space.

pposite the beautiful 12 meter high alter, painted onto the seats reserved for the family, are three coat of arms, belonging to the former owners of the monastery.

The Cathedral is one of the three cathedrals in Denmark that is privately owned.

This is why the responsibility for and costs of all upkeep and renovations work on the church are given to the owners Anne and Hans Rottbøll. 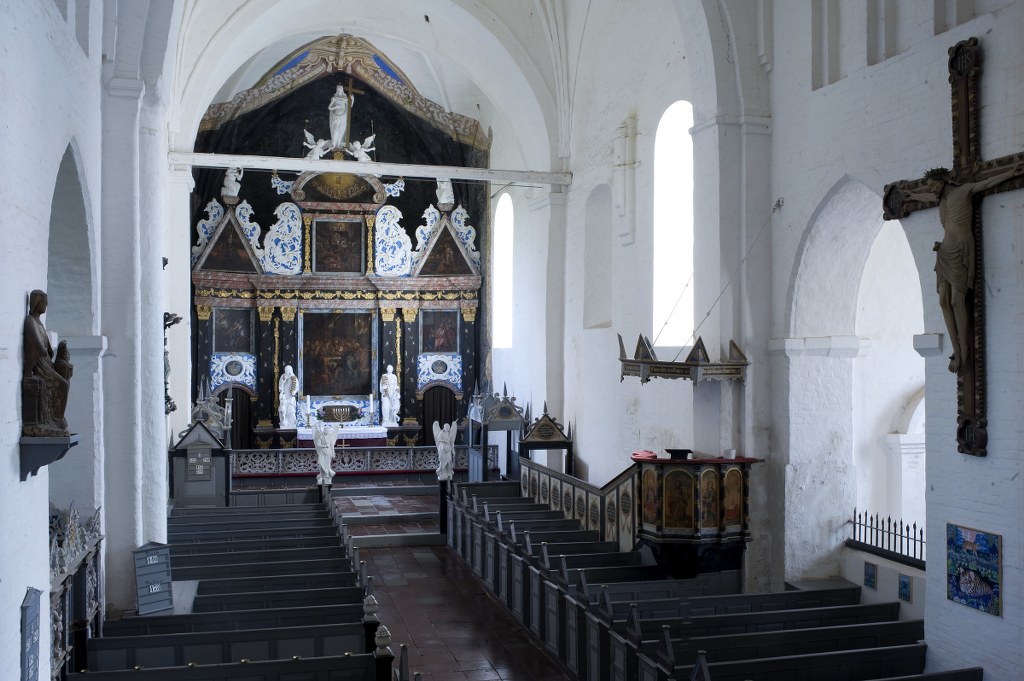 He was trained in England by SOE and was given the task of starting the Danish resistance movement against the Nazi-occupation.

He is buried next to both of his parents. 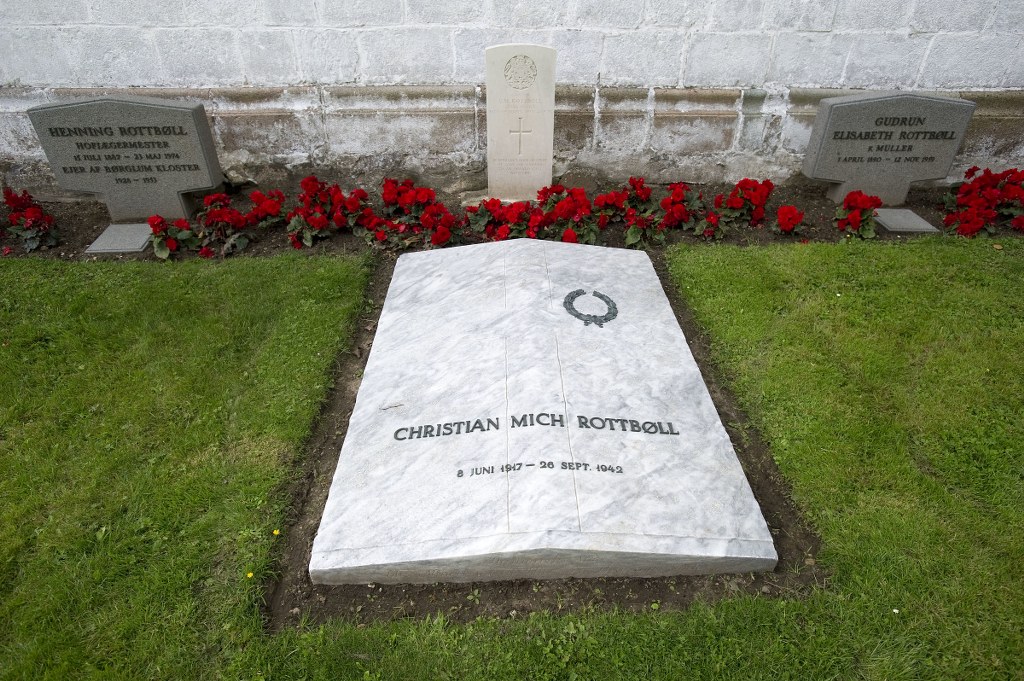 The Herb Garden (the northern gardens)

Go exploring in the old herbal gardens of the monastery.

Read about 1000 years of scientific knowledge on herbal-based medicine, used by the monks to help the sick and to earn money for the monastery. The monks were also known as “the white monks” as they wore white robes.

The history of the Monastery

In the Eastern Wing are exhibitions, telling the story of the monastery through its years. Despite the monastery’s thick walls and geographic placement at the very north of our country, it still takes a great role in the history of both Denmark and Europe through the last 1200 years.

The monastery’s interaction with the outside world is quite vast, stretching out across the northern part of Denmark and much further, as Børglum Monastery has been one of the main powers of the country throughout its century long existence.

With the exhibition you can read about the monastery’s long history from its very beginning until today. The monastery has, for good or bad, always been the home of influential people; bishops, monks and resourceful nobles, royal appointed caretakers and landlords; all affecting the monastery in their own way.

Visitors will be able to get to know all of the many variegated personalities and dramatic events by going on a historical journey within the eastern wing of the old monastery.

The magnificent buildings that rests proudly and mightily on the top of the hill, looking out on the landscape, contains the many items, interior, portraits that together tells the centuries long story of the lives lived at the monastery

Read the history of the monastery in three levels of historical exhibitions.

Also take a look at the lapidary exhibition, the old livery stables, and Santa’s secret room from the production of the Christmas TV-movie “Ludvig and Santa Claus”.

Krumme, an alias created by the former master baker Niels Erik Schmidt, is a living legend in Hjørring. Throughout his life he has entertained both children and those with a child within.

In his “den” he has created a unique collection of memorabilia, sharing his entire life story, his life’s work and local history through pictures, notes, items etc.

Krumme has bequeathed his “den” to the local historical museum, but before it travels to the museum, the visitors of Børglum monastery gets the opportunity to see, how Krumme throughout his life has strengthen and shaped the cultural life in the city of Hjørring.

It is not possible to imagine all of the whimsical items in his collection and all of the many famous individuals who have visited him here. It is only know that the “den” is open for visitors. 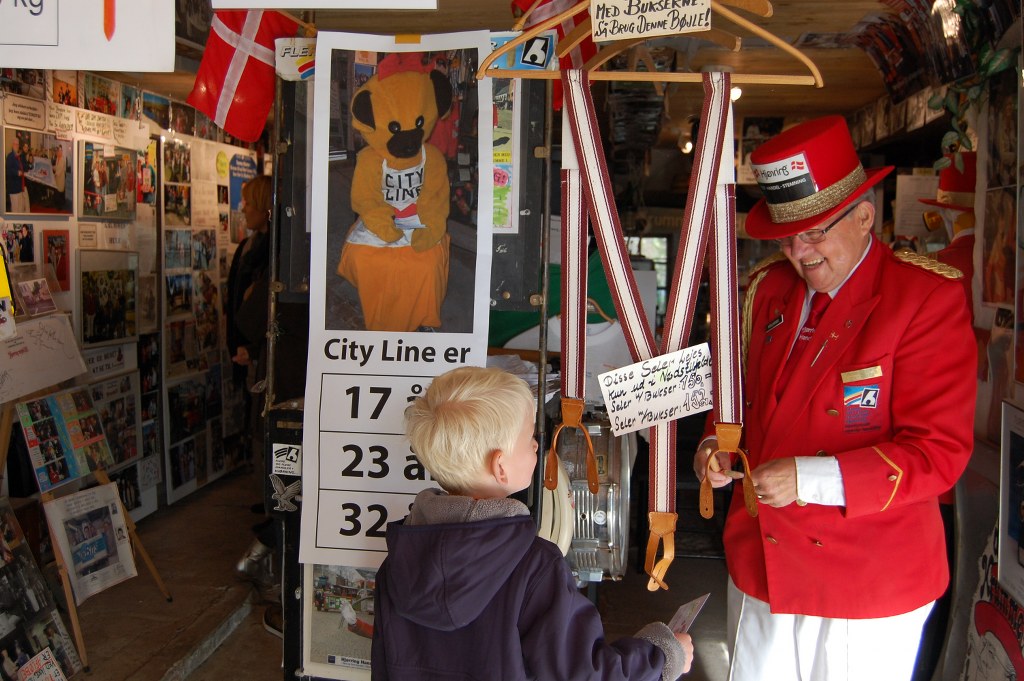 A unique collection of toys for both boys and girls

The collection was originally part of the “Misser’s doll and toy museum in Ebeltoft”. But now, the collection is displayed here at Børglum Monastery.

Discover the many different toys throughout many years and reminisce the toys you used to play with yourself, and tell the stories to your children and grandchildren. 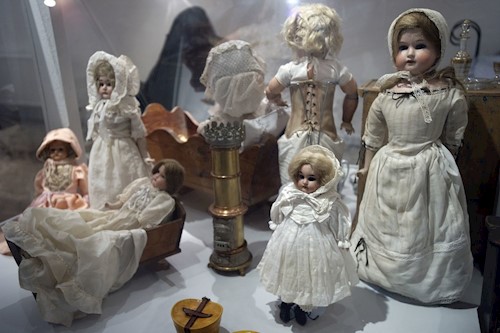 Exhibition of fashionable dresses and costumes

A new exhibition of fashionable dresses, throughout history, opened in 2017. Experience the main tendencies of the female fashion throughout 100 years.

Study party dresses, wedding gowns and the changing fashion from a time, where the world is affected by both the Second World War and later the Cold War.

Here you may see a selection of the many decorations and props used in the production of the Christmas TV-movie filmed at the monastery.

The installations were by a famous Danish stage designer Erik Peitersen, whom also build Santa’s Workshop in its entirety, enabling children and those with a child within, to explore the workplace of Santa’s elves.

Get photographed as or alongside the elves Klik and Klak or Santa and his wife. 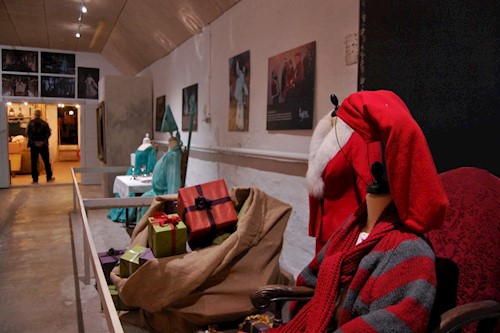 Experience for the first time or relive the success, that was the Danish Christmas TV-movie ”Ludvig and Santa Claus” from 2011.

By visiting us you can see a recreation of Santa’s workshop on Greenland, where in 2011 worked more than 30 elves, including Klik and Klak, Santa’s wife (Camilla Bendix) and Santa (Lars Hjortshøj).

In the livery stables, in the eastern wing of the monastery, you may find Santa’s secret hiding place, and in the cellar you may see the dungeon in which Santa is locked up. The DVD is available for purchase in the museum shop. 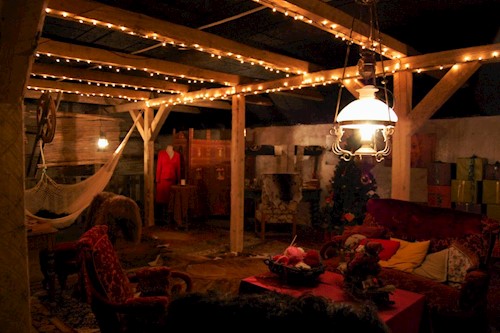 Ever changing art exhibitions and The Bayeux Tapestry

On the first floor, you may see an exact copy of the famous Bayeux Tapestry, made by local women.

You may see the tapestry up close, experiencing the vibrant colours that resemble the original colouring of the tapestry in Bayeux and the incredible craftsmanship put into the woven fabric, presenting us with the history of the Battle of Hastings; a battle wherein the local Vikings was very much involved. 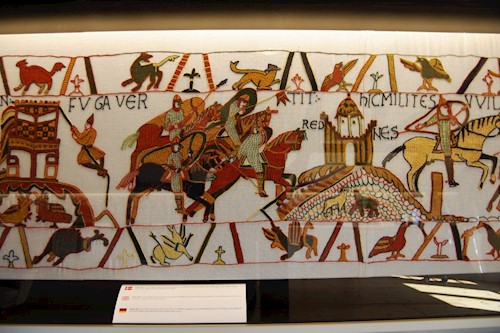 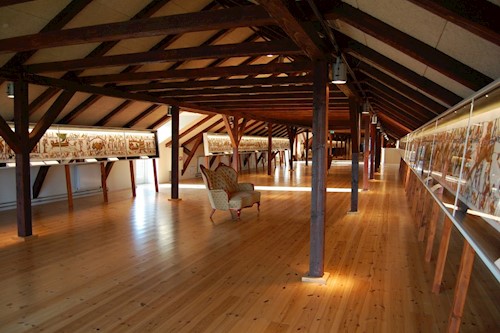 The café “Vognporten” was inaugurated the 21st of August 2013. In the café you and your family and friends can enjoy a well-made meal, taking a perhaps needed brake form all the 15 different exhibitions of art, culture and history at the monastery.

The café is placed in the newly renovated carriage house. Here, they serve a delicious lunch that you may enjoy along with a glass of wine, beer, soda or water, and perhaps later on a cup of coffee, tea and something sweet. If your party counts more than 25 people, you can make a reservation for a lunch buffet.

The old Church Cemetery of the Monastery.

The Hill of Bodil

The hill just outside the monastery is the hill of Bodil.

This hill is one of the original barrows from the Viking age. The mill was later build on top of the hill, firstly for practical use and today as a symbolic gesture, as the wings are left in a cross-position, remembering the freedom fighter Christian Michael Rottbøll

The arms of the old windmill are positioned in such a way that they resemble a cross.

This is instead of the wings being positioned in an x, which is the custom, as this position is much healthier for the construction of the entire mill.

However, the wings of the windmill are positioned to resemble a cross in order to give honour to and in remembrance to Captain Christian Michael Rottbøll, who created the Danish resistance and fought against the Nazi-occupation.

The Danish Police, whom were ordered to collaborate with the alien occupying force, killed him in 1942.

He was trained as an agent by the British Intelligence SOE, and became the leader of Special Forces within Denmark.

The spring of Sct. Bodil is placed closely to the windwill build on the hill of Bodil. The spring stems from the north-western side of the hill. 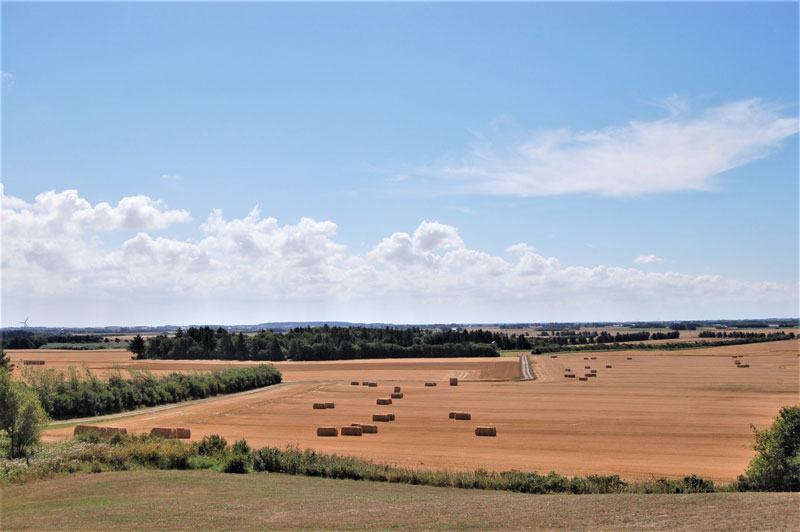