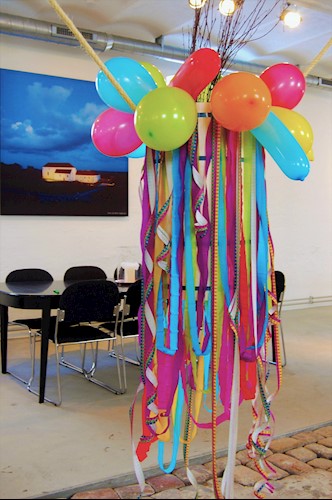 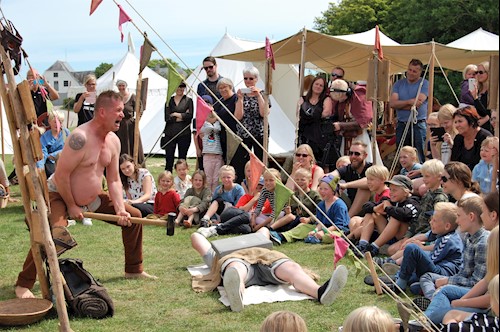 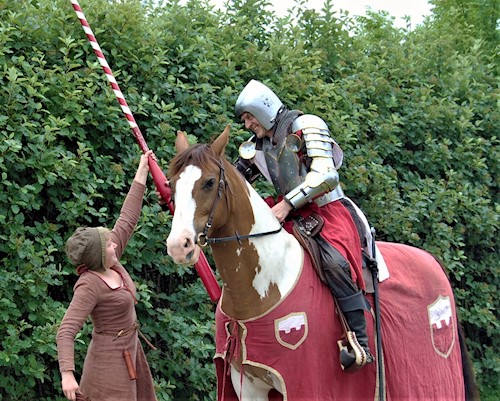 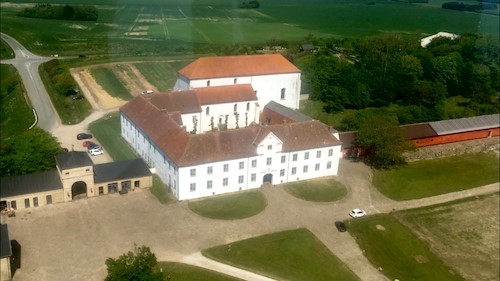 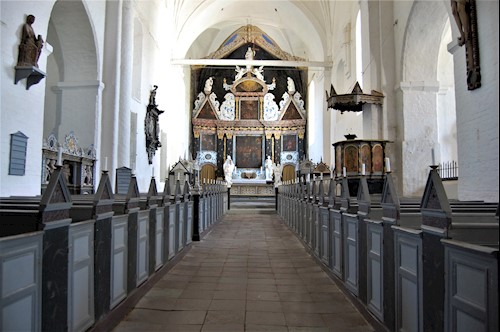 With its high vaults, its white purity and its magnificent inventory, the church is impressive and entirely unique. Even though it is smaller and far simpler than the original structure.

The decor is the work of Laurids de Thura, which he created between 1725 and 1750. Then owner and de Thura's later father in law, Kiærskjold, asked the young architect to take charge of the building of the new inventory in the church that was to replace the probably very decayed structure from the Catholic era. Notice the majestic and very beautiful alter structure. The curious black draping of the east gable is painted to appear velvety and surrounds the alter, so the impression of a flat gable wall nearly disappears. The alter rail is an extremely beautiful piece of wood carving. In the second arch one can make out the high pointed arches which were once open to the transepts.

At the centre of this side, you will find the opening to the baptismal font. Along the walls of the baptismal room, there are 35 children's figures carved in wood. Each is different, with its own unique symbolic significance. The piece above the font is from the same period. The crucifix on the southern wall of the nave is from the 1400s.

The organ loft in the west end, where the pew for nobles is located, is decorated with Kiærskiold's coat of arms in the middle, Rantzau's to the left and de Thura's to the right. Above the pew for nobles is the handsome organ in Rococo style, which de Thura gave the church when he took over the property in 1750 by way of marriage.

In the southern end of the nave, you will find the de Thura family burial chamber in the west. The tombstone in marble was created by de Thura himself. It has no inscription, however, as de Thura is not buried here, but in Trinity Church in Copenhagen. The state paid for his burial in recognition of his outstanding work as master builder through the years. Several members of de Thura's closest family are buried here in the burial chamber at Børglum Abbey Church, which is closed to the public.

Just above, toward the east, there is a memorial for chief justice Hillerup, who was owner from 1809. On a column between this aisle and the nave, one finds a memorial plaque for Captain Christian Michael Rottbøll, whose grave is situated at the east gable of the church, in the old apse.

The apse's exact ground plan is marked with blocks of granite. They were once part of the church that was demolished in about 1600.

On the north side of the church a ground plan is marked of the demolished northern transept. In the outer walls of the cloister buildings, there are cell windows in the upper storey. In the lower storeys there are similar windows, with the arched blinding over everything from the monastic period and the higher rounded arch windows from the restoration in the vassal era. All this was discovered during an extensive restoration in the period 1932-35.

The granite basin at the centre of the cloister was probably used as a holy water stoup and was built into the wall at the original entrance to the church.

In the cloister's pavement, you will notice rectangles marked with large stones. The rectangles undoubtedly mark the graves of monks.

The church is still a parish church, even though it is in private hands and all maintenance is the owner's responsibility. There is church service every Sunday, where all are welcome.

The organ was restored in 1980 and is said to be one of the finest baroque organs in Denmark. The church is often used for church concerts.

In 1995 and 1996, the church roof and outer walls were restored with subsidies from private funds, EU and Danish conservation authorities.