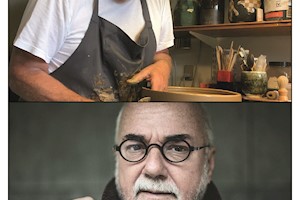 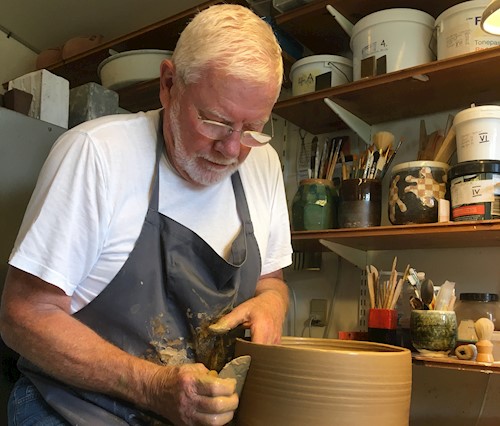 As an architect, I have always been interested in design and shaping.
In my work with ceramics, I am free to experiment with colors, surfaces, aesthetics and expression, and it is a pleasure every time I succeed in creating the result that I imagined.

To experiment is to tread new paths and find a way. 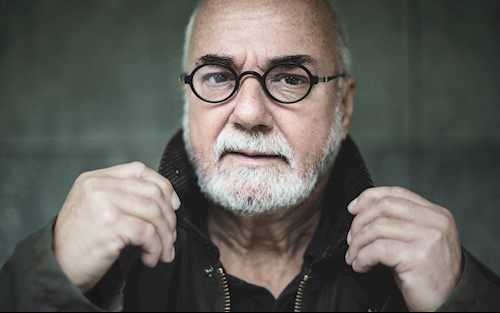 In his paintings, Lars Kastanje experiments with acrylic paints and Japanese paper, where he has developed his very own special technique.

From the beginning, Lars Kastanje has decided on the motif and the choice of color, which must describe exactly the narrative and feeling that will complete his work. His images are influenced by surroundings and fictional phenomena, where the expression is imagination and humor and the intention is to evoke emotions, as well as inspiration and contemplation.

Café Vognporten is looking forward to offering delicious food in the 2021 season.

Are you considering a trip by group or bus? See Café Vognporten's offers for buses and groups here 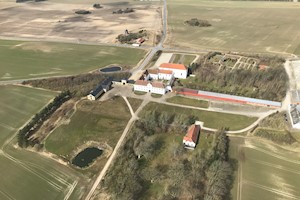 Corona passport, a negative corona test or face masks are no longer requiredwhen you visit.❤❤😊

Experience also the art exhibition by Lars Ibsen and Lars Kalmar Kastanje. The exhibition can be experienced on the 1st floor of the renovated horse stable from 30 April. Read more about the exhibition here.

New historical exhibition in the Lapidarium. This exhibition tells about the building history of the abbey  and the old cathedral. Read, among other things, about the Børglum stone, the old cathedral, experience the reconstructed triforium and read about when Brother Eskild went to Rome to get a papal dispensation to move the abbey buildings.

Café Vognporten has a new menu! Read about the new menu here. 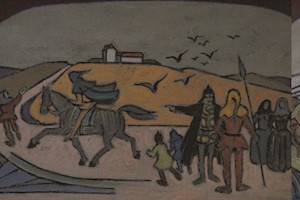 'At the end of the rainbow - The rainbow painters in Løkken'

The artists' association ‘Regnbuen’ (the Rainbow), was formed by Chr. Valentinussen, Erik Larsen and Lars Nielsen in 1938. In 1938, the art dealer P. Krogh Geneser bought the disused lifeboat station on Sdr. Strandvej and inaugurated it as an exhibition building with a painted rainbow on the building, with exhibitions by these previously mentioned Regnbuemalere (Rainbow Painters).

At the end of 1938-42, this association expanded with a considerable number of artists. However, the development they set in motion lost its momentum two years after its inception, due to the German occupation. As a result, the Løkken exhibition ‘The Rainbow’ only had a short-lived golden age.

“One is tempted to draw parallels to the natural phenomenon that the rainbow is named after - that is, the fleeting refraction of light in the water after a rainstorm. One can only just manage to enjoy the color spectrum of the sky before it is gone again. One of those kinds of sensory experiences that must be enjoyed to the fullest, while it is happening. ”

The pictures can only support the memory of the people who made up the artists' colony, in Løkken.

The rainbow painters are represented at this exhibition with the following artists: 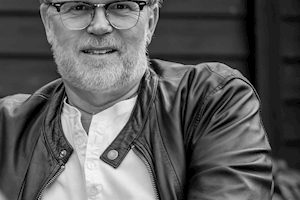 The art exhibition 'When the hands are singing' by Ib Grønbech can be experienced from June 19. until October 18. 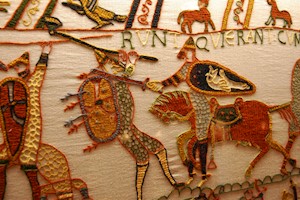 On the first floor, you may see an exact copy of the famous Bayeux Tapestry, made by local women.

You may see the tapestry up close, experiencing the vibrant colours that resemble the original colouring of the tapestry in Bayeux and the incredible craftsmanship put into the woven fabric, presenting us with the history of the Battle of Hastings; a battle wherein the local Vikings was very much involved.

The tapestry is more than 70 meters in long and took 9 local women 15 years to recreate. 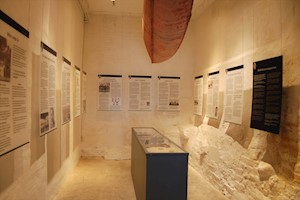 Called 'MIk' by his close friends and family, Christian Michael had a short but eventful life that brought him to first to Argentina, then Finland as an volunteer in The Finnish Army and finally to England where he was trained as a special agent before he returned to Denmark to lead the danish resistance. He was killed the 26th of September 1942 06:12